Finally came the day where Windows 8 "Consumer Preview" was available to download (link) and also the day I got a hold on an old T61 14" (8898) and in combination, those to make a perfect new toy! The Hardware:

After having installed Windows 8 on it, I must admit it just works! Its fluint and a great experience! Personally I didnt like the developer preview, but after the Windows teams overhaul of everything with more than 100.000 source depot checkins since, its really a consumer system now! Even though I have no touch capabilities on the T61, the system is live, vivid and easy to use. The inbuilt PDF reader is simply awesome, instead of having to go and download Adobe's version first... And Messenger/facebook chat clients are eays to use, popups the messages I want when I want them and it really gives a view of "freshness" on the OS. Especially one thing has so far been astonishing for me.I had to download some software which used .net 2.0/3.0 and when trying to install, the following was Windows' response: 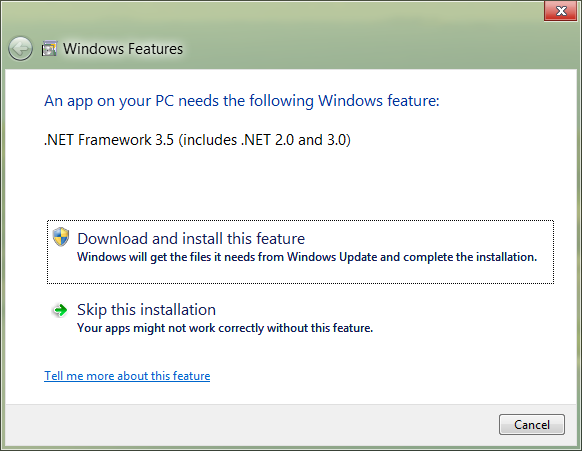 That is serious usability for you! No need to google the installers, trying to figure out what to do.  Windows tells you right away!