Finite State Machines (FSM) can be an awesome tool when creating software. Creating FSM's, is typically split into multiple phases, the first being trying to visualize the workflow the FSM is representing. This is often done using "state diagrams". Let's have a look at an example. The following diagram is for a state machine, taking in an input string, and trying to match the 4th, 8th, 12th etc. '1' in an input string. 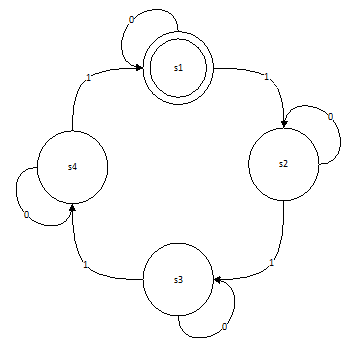 So the STM will keep looping around, until it finds a multiple of 4th '1' in an input string with the input possibilities of 0 and 1.

Using discrete math, we can break down this behavior, into the following definitions.

Then we can define a Matrix, ns, with the transition between states, based on input value. Aka. Next state.

And lastly, we can define the result matrix, ? (omega)

Let us build up the matric, and see the FSM in action. First off, when building matrices in MatLab, you do it as if they were vectors, however for each column, you break it with a ; instead of a normal comma. Thus creating the matrices omega and ns we put in:

The input and output vectors are pretty simple, as we expect only 0's and 1's, thus both will be defined as:

Now we have everything to use our FSM, except for an input string. Since we are supposed to catch the 4th, 8th, 12th etc. '1' in the string, we should have a string which length is long enough to contain at least 12 1s and a number of 0's. We define x as:

Our output from the function is pretty long since MatLab automatically adds more text to the output, as it counts the columns. If we wish to make sure out input is correct, we should have a look at the input string (x) and figure out at which positions, the 4th, 8th and 12th '1' is. In this particular case, we have it at the 5th, 12th, 16th, 22nd, 26th and 33rd position. To easily check which positions are '1's in out output in MatLab, utilizes MatLabs Find function. We can do a Boolean match against the values in a vector, and get the positions if we do:

Which compares to our expected result!